This flag is intended for standardness-only, and the primary goal is to
make is so that malicious super-high-density-SigChecks transactions cannot
get into the mempool, where they would frustrate simple block assembly
algorithms.

A transaction conforming to this rule cannot (overall) exceed a density of
1 sigcheck per 36.666 bytes.

The general direction is good, but there are a few problem with this patch.

First, it implements the counting mechanism and the higher level checks at once. It is better to implement the counting alone and test it, then wire that in in the script verification process thing in another.

Add a test that Run EvalScript on various scripts and get the expected results.

There is still more to do on this, but just updating for now.

Now that we've switched to the areAllSigaturesNull approach, I am finding it difficult to write *any* standard script that is affected by the very short script case (shorter than 46 bytes), where the "L / 23" part of the limit becomes active. (previously such a script was easy, using 0-of-2 multisig as seen in prior version of this diff)

So I'm thinking of removing the L/23 part, and just having the (L+60)/43 simple line limit. Below I've plotted the inverse of density (taking into account an input has total size of 41 bytes + len(scriptSig) ), and compared the two rules. Note that sigchecks has to be an integer hence the staircase appearance. 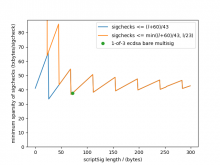 Using just the simpler rule (the blue trace) will increases the theoretical maximum density slightly (from 1/36.666 to 1/33.5), but exceeding 1/36.666 requires scriptSig to be between 26 and 32 bytes (inclusive) and execute two sigchecks. I can't think of any standard spend that would be shorter than 32 bytes scriptSig and even execute one signature check, much less two of them! It's easy to come up with nonstandard spends that do this, but this is intended to be a standardness rule.

Simplify by removing the scriptlen/23 piece.
I've been racking my brain trying to think of any examples that it would
impact and I can't find any.

Requesting change due to parent. This looks good, but the parent doesn't and this will have to be adapted to the parent and will need to be reviewed again.